On a cool summer Saturday morning (yes, the leaves are turning and it’s getting chilly out in the morning now) – our intrepid VA4WAN install team heads out to do yet another install.  Instead of just being a VA4WAN installation, we’ve reached out to other groups and are installing two large pole mounts to support a minimum of 2 other RF units  beyond our usual high speed networking system.  At the site will be a VHF unit (the return of VE4WRS from MRS!) and a UHF system (a new home for the local DMR system!)

You may not be familiar with this site.  It has been used by Prairie Mobile in the past as well as some other hams who have had gear up there.  A number of years ago, the site was dismantled and roofing repairs had occurred – then with no return of RF back to the roof.  With our agreements in place, 601 Osborne (re: Fred Tipping Place) will be a new RF environment for our ham group services.   The location is great in the south part of Osborne Village.  As I look across the horizon, there is little, if any, other high buildings around that would contain significant amounts of RF being emitted, so the receive at this site should be phenomenal – being 18 stories high – albeit there may be some shadow to the north from the city centre:

To mount these poles, we had some experts.  Our two certified climbers, Colin VE4CST, Derek VA4AFK and site expert Rob VE4CA along with jack-of-all-trades Jim VE4SIG who is prepared for almost anything and William VE4VR and myself.  (I’m mostly along to help with the grunt work while the pro’s do their job installing):

It was great that we had some spare time to chat about various groups and activities and things we can do to help ham radio and keep it moving ahead.  My XYL (Michele) also provided us a lunch bucket of sandwiches, muffins, veggies and water!

Jim and I made a run out to pick up some odd parts that we needed (once we knew for sure what parts we had to use after final cuts/measurements/etc).  Traffic on a Saturday was nuts with all the construction – what should have been a 20 minute run took almost an hour! Oh well – we arrived back just in time for the crew to make use of the parts. 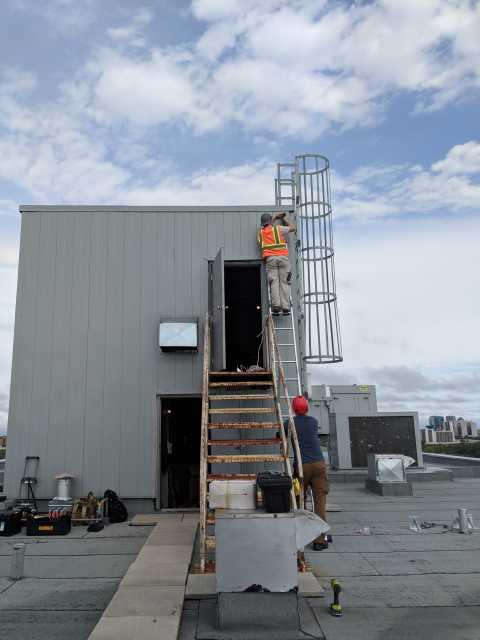 These are very thick and heavy mount poles (thanks Rob!) and took us all to hold it in place while they were being mounted.

While we were only able to have enough time to mount the one pole, we’re all set to go back and get the other one setup on the north side fairly quickly.

With the new site and moving services to it, it will be a great opportunity to also explore new technologies and services to offer the ham community.